Yesterday’s Facebook Marketing 2012 conference in London was, if anything, a little too packed with excellent speakers and valuable insights (we were greedy with our programme!). Here’s a...

Yesterday’s Facebook Marketing 2012 conference in London was, if anything, a little too packed with excellent speakers and valuable insights (we were greedy with our programme!). Here’s a lightening quick run-through of the highlights with links to presentations and extra resources:

Suitably, Facebook kicked off proceedings with a Keynote from Andy Pang (Lead, Measurement Solutions), who explained how Facebook measures the three primary indicators of engagement – reach, resonance and reaction. He stressed that clicks don’t necessarily equate to sales, so aren’t a reliable metric and suggested that that, since Facebook can identify who is speaking positively or negatively about a brand at any given time, the platform could also be used for reliable, targeted, market research (expect more on that).

He gave us some interesting stats: 70% of “well managed” Facebook advertising campaigns achieve a x3 return; a Nutella campaign in Germany spent 7.5% of the marketing budget but attracted 15% of sales and reached 3.8 million people through the network. This last point being important as, apparently, seeing your friends’ names linked to adverts on Facebook leads to a 50% uplift in ad recall. Facebook are also working with Nielsen and others to measure the influence of Facebook ads in driving sales – something they see as more than a value-add to running a campaign.

Second up were Tom Smith and Brett Peterson from Global Web Index, who wowed us with some impressive statistical analysis of Facebook and other networks across the globe. Globally, Facebook has near 100% usage penetration with the UK right at the top of the pile. Japan has the lowest Facebook penetration, but is growing the fastest in terms of uptake (along with Indonesia).

Interestingly, China – where the network is banned – has 30% penetration, with users accessing it through private networks, such as VPNs. Facebook penetration is also falling in the US and Russia, where it has competition from new, niche networks and local language offerings. Google+ is big in Russia too. Who’d have thought?!

Next up was Richard Ayers, who manages social media for both Manchester City FC and the British Film Institute (BFI) in London, talking about Facebook within your social media strategy. Richard explained how Manchester City uses exclusive, behind the scenes content to drive Facebook engagement, and mooted the ideas that local fans could manage regional Facebook Pages. He also confessed that the BFI has a secret Star Wars scrapbook (perfect content for Facebook – and geeks) and is creating it’s own Timeline of the British Public’s relationship with film.

Kathryn Corrick moderated our first discussion with previous speakers, Richard and Tom, joined by Vincent Sider (BBC). Kathryn asked “How does your Facebook Page look in the iPhone or iPad?” and showed how terrible most pages look. Worth fixing, for sure. Vincent Sider explained how getting local (national) pages aligned with a main page on Facebook is mostly down to agreeing a naming convention, and sticking to it. Richard coined the phrase “passionists” for fans who love your brand  and gave the best retort of the day when asked if Man City are about to sign Robin Van Persie. “Who’s Robin Van Persie?” (Geek credentials confirmed).

Next up was Kelvin Newman from SiteVisibility, who, although an SEO man at heart, gave a brilliant exposition of the art of EdgeRanking – i.e. getting your content to appear in your fan’ Facebook newsfeeds. Whether content appears depends on their “affinity” to you (how close they are deemed to be), the weight of the content (videos, photos and links are heavy, links and text updates are light), and the “decay” of your content (i.e. how old it is). The key takeaway, I think, was his advice to prime your big marketing campaigns by releasing teasers in the days before, to increase engagement and maximize your Edgerank. Clever stuff. 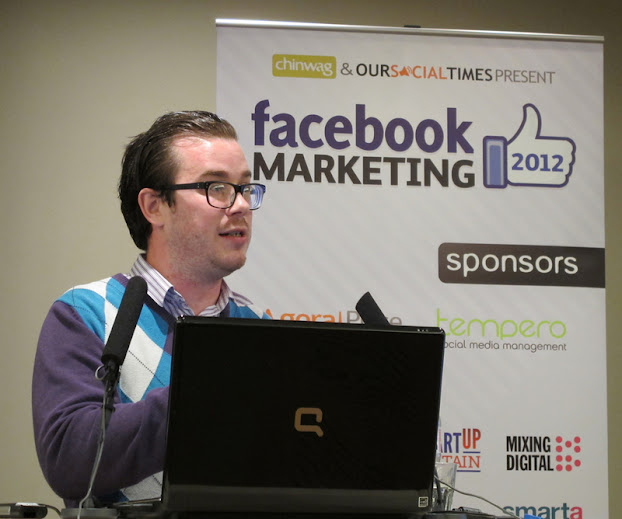 Dom Wright from Yorkshire Tea brought us back to earth, saying “It’s about the human touches, not algorythms”, citing the small, daily observations posted by the tea brand as evidence. He also explained how he ended up providing a live Twitter commentary for one of the Charlatans (the indie band), relaying the plot of TV show, Homeland; an event which became a much discussed topic on Twitter and Facebook.

Our “Facebook Ads” speaker, Jeremy Waite (from TBG Digital – “the worlds biggest Facebook advertiser”), blew us away with a heartfelt criticism of brands that don’t understand Facebook’s Advertising platform and still compare it to PPC models (like Google Ads). They are missing the “social context” and the massive opportunity for scale offered by friends-of-friends. He showed how BT’s 68k fans shared it’s recent “vote for the Wedding dress” (of the famous TV ad couple) campaign with over 13 million people across the UK – driven by “emotion, not facts”. He implored us to “tell stories” on Facebook and ensure we’re measuring the results.

Emeric Ernoult, CEO of the Facebook engagement app company, Agorapulse, then showed us exactly how to generate measurable ROI by running a competition on Facebook, combined with Ads. His client generated $45k in revenue from a small investment and reached over 1.3 million people [you can read another case study from Agorapulse here].

After refuelling at lunch, Nils Mork-Ulnes and Judith Lewis (Beyond) gave us some great insights into the science of sharing.  With 4 billion items shared daily, Facebook accounts for over half of all sharing. Understanding what motivates this behaviour is important if brands are to encourage advocates. 40% of shares are driven by altruism, but it doesn’t hurt to offer fans a small bribe as 60% will share information in return for a discount.

We were delighted to have Sarah Lindley from Cadbury’s Dairy Milk present, not least because she supplied free chocolate. Her case study focused on their 1 millionth Fan campaign, where they built a giant thumb out of 1 million pieces of chocolate. The 2-day build was shown on a live-stream and was a great success largely due to the real-time responses on Facebook. Fans could get involved by making suggestions that were enacted straight-away and culminated in one lucky fan winning a trip to London to add the final piece. 350,000 of the 1 million fans got actively involved in the campaign.

Russell Goldsmith (Markettiers4DC) and Stephanie Conlon (MEC) then spoke to us about engagement through videos and livestreams.  Amazingly, video is the most shared content on Facebook but only 8% of brand posts are videos. This is a huge opportunity going to waste, as was shown by some smart case studies. These included live streaming Sascha Baron-Cohen’s latest film ‘The Dictator’. The likely reach of a post through their Fanpage was 8000, so they used Facebook ads to increase their reach. By using a pop-up box rather than driving viewers to their Facebook Page, they attracted 3.5 million unique users in 2-hours.

Kellogg’s, Dove and Doco then treated us to 3 quick-fire case studies. Katie White (Isobar Social) started off with an interesting thought, how can brands compete with photos from a friends wedding or a relatives baby scan? Particularly when the brand is cereal and not seen as particularly exciting. The answer is tone. Each Kellogg’s brand has a framework for tone of voice that is maintained on social. For instance, Special K is about positive feelings towards healthy weightloss and Crunchy Nut focuses on obsession – lending itself perfectly to sharing.

Emma Gannon (Edelman) spoke to us about Dove’s emphasis on community. Every aspect of their marketing focuses on ‘real women’ and on Facebook that is the emphasis, not the brand. They do this by using Timeline to tell the stories of real women rather than the brand and increasingly allow their community managers (who are also real-women) to speak as themselves rather than the brand.

The world once believed that there was no such thing as a Black Swan – until they were discovered that is. Maurice Wheeler (Doco) highlighted the value of these “Black Swan events” (which are impossible to predict)  and suggested “innovation as a strategy”. He recommended creating agile social media teams and seeing failure as just a stop-off on the road to success.  It’s very hard to predict what will work and what won’t, so be flexible and try news things – just don’t promise your client that your next campaign will be a great success.

Open Graph allows apps to automatically share users actions and allows publishers to greatly increase their reach, but at the expense of irritating the majority of Facebook users. Martin Belam (Emblem) is the man behind The Guardian’s Facebook App. He told us that referrals to The Guardian’s website from Facebook usually bounce back after reading one page. If a user is on Facebook, that is where they want to stay and sending them to an external site interrupts that experience, whereas the app allows them to stay in Facebook. After reading a serious article, the app can suggest more trivial content. This also helped introduce them to a new demographic, with the average age of their app user significantly lower than readers of the paper.

The final part of the day looked at F-commerce and we kicked this off with an introduction by Paul Marsden (Social Commerce Today). To sell on Facebook you need to do something remarkable, such as giving fans early access to new products. Users are not interested in having your webpage squashed into Facebook. Facebook can also be used to enhance in-store experiences, for example, Diesel have installed Facebook in their fitting rooms, allowing shoppers to photograph themselves in a new outfit and asking for advice from friends.

What do fans want from brands on Facebook? Discounts! We hear it all time, but according to Tom Messett (Nokia) it is rubbish. If you ask an in-store shopper what they would like, they would probably say cheaper prices, but that doesn’t mean you have to give it to them. He also argued that we sell products via partners, and the goal is to drive consumers to those partners. If someone has purchased a new phone, they will be excited about that purchase and we should make it easier for them to share that excitement with friends.

Heinz had received a number of mentions during the day, so it was apt to have Tom Ollerton (We Are Social) finish off the day with this case study. The launch of their balsamic vinegar flavour ketchup was done entirely on Facebook and created great excitement. When fans received their bottles, they would upload photos themselves and share the news on Facebook. The main flaw was that people didn’t trust Facebook with commerce, so for their next campaign ‘Get Well Soup’, purchases were made using Paypal. As people associate soup with being unwell, they allowed customers to buy personalised tins to send sick friends. The idea being that to sell on Facebook, make it something original that they can’t buy elsewhere.

Liberate Media provided a live blog of the day that you can read here. The Twitter report (produced by Jeremy Waite) can also be viewed and all the photos from the day are available on Facebook.