Facebook shares dipped this week as they announced first quarter revenue was a mere $3.54 billion (not the $3.56 expected). More interesting to marketers are Facebook’s other announcements....

Facebook shares dipped this week as they announced first quarter revenue was a mere $3.54 billion (not the $3.56 expected). More interesting to marketers are Facebook’s other announcements.

Facebook continues to dominate other comparable social networks in social media statistics. In March they had 1.44 billion monthly active users, which is up 13% on last year. More interestingly though, the number of people using Facebook on mobile devices is rising quickly. Last month 1.25 billion people actively used Facebook on mobile devices. The pace of increase in mobile use continues to speed ahead of desktop. Although a mere 798 million people now use Facebook daily on mobile compared to 936 million using it daily on desktops, the pace of increase among the mobile users is nearly double that of desktop users.

In 2014 at the peak of the ice-bucket challenge, which was Facebook’s biggest viral video event last year, there were 1 billion people watching videos daily on the channel. In the last 6 months this has quadrupled to over 4 billion daily video views, 75% of which are on mobile devices. There is cause to be wary of the figures of course, Facebook counts a video play as anything more than 3 seconds, and the introduction of auto-playing News Feed videos means many of the plays will be a result of this. Nonetheless video is a big trend for 2015 and an area of huge growth for Facebook advertisers.

Facebook have this week launched a new Android app called ‘Hello’. It allows you to call any Facebook friends who have uploaded their phone number to their profile and made it public. It also works for numbers already in your phonebook. If you can’t call them because of their restrictive security settings, Hello will take you to the Messenger app so you can still contact them. How does this affect your business page? If your business’ number is public on your page people will be able to call you directly through Hello rather than having to leave the Facebook ecosystem for their regular phone app. The impact is yet to be seen, but in removing steps between people accessing friends and businesses, Hello is a user-friendly addition.

That the News Feed is no longer free territory for brands is well known. But in a blog post this week Facebook announced it will be making some changes to how posts appear. Content from friends will be given priority and pushed further up the News Feed so that users are less likely to miss it. Reacting to feedback that users don’t like seeing posts from pages just because a friend has ‘liked’ it, they also will be moving these posts further down the wall. This likely means that organic reach will further diminish, with Facebook admitting “post reach and referral traffic could potentially decline”. The move will be a welcome one from users who will see more of their friends and less of irrelevant brands. But it means that optimising your Facebook adverts is more necessary than ever. 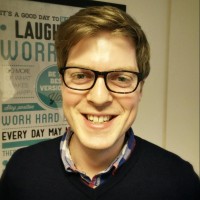 Simon is an Account Manager from a marketing background. He loves keeping up with all the latest developments in social media and search, as well as seeing all the latest updates from family around the world on Instagram. When he’s not browsing and blogging he likes exploring Cambridge one restaurant/cafe/bar at a time.